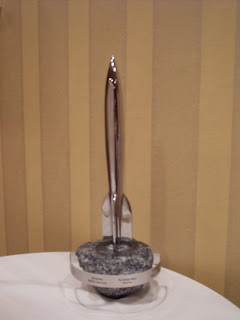 Last night at Anticipation in Montreal I won a Hugo.
I have never been more surprised in my life. So convinced was I, for several good reasons, that I was going to lose, that I didn't have my shoes on when the winner for Best Novella was announced. I had just glanced at my watch to see when the ceremonies would be over. I had no speech prepared. But then presenter Elisabeth Vonarberg announced, "The winner is 'The Erdmann Nexus' by Nancy Kress."
This year's Hugos, designed by Dave Howell, are a chunk of rock representing an asteroid, with the Hugo blasting off from it. Below the rocket itself is an inset "firebase" of orange and red, in the rough shape of the Canadian maple leaf. The name of the winner is engraved on an encircling, detachable metal band that, when worn over the eyes, makes one look like a character from STAR TREK. The statue is beautiful and very, very heavy. My thanks to Jack Skillingstead and Daryl Gregory for carrying it around for me most of the night.
The other fiction winners were Ted Chiang for "Exhalation" (Best Short Story), Elizabeth Bear for "Shoggoths in Bloom" (Best Novelette), and Neil Gaiman for THE GRAVEYARD BOOK (Best Novel). Here are winners and presenters on stage at the Palais de Congres:

Before the Hugos, I had been at a dinner arranged by Robert Silverberg, an annual event. The conversation ranged from a discussion of the nominees to a brain-wracking session of trying to remember the names of all seven of Snow White's dwarfs (thank you, John Kessel). Out of focus below are George R..R. Martin, Paris, Jim Kelly, Bob Silverberg, Karen Haber, Connie Willis, Jack Skillingstead, Walter Jon Williams, and John Kessel.

Earlier, the day had included a kaffeeklatsch, yet another panel, and lunch with my Tor editor, Beth Meachem. This means that once more I have attended a Worldcon without seeing much of the city in which it was held. But it's been a lovely Worldcon anyway.
Posted by Nancy Kress at 4:08 AM

I just want you to know that it was my vote for "Erdmann" that pushed it over the victory line.

Just kidding. I bet you'll be shocked to later discover it won by a big margin. Great story.

And my congratulations, too! Now the Hugo for "Beggars in Spain" will have a friend to talk to.

What exciting news! Congratulations on the win.

I've enjoyed all your posts from Worldcon, but this was an especially nice capper.

And I'll eat my spaceboots if you don't win one for STEAL.

The best kind of surprise! Congratulations!

You are on the way to earning a Hugo for every category.

“The statue is beautiful..." Thank you! And congratulations (quite belatedly, to be sure). In a wonderfully self-referential sequel, I've actually been *nominated* for a Hugo in 2010 because of my work on the 2009 Hugo base.