Last night Graham Joyce, in Seattle to teach week 3 of Clarion, read at the University Bookstore: 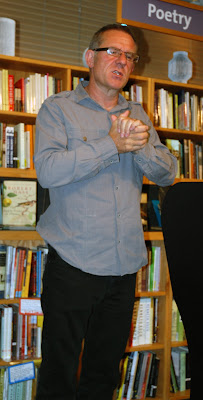 His reading was really well received, and so were his remarks before and after; one point was particularly interesting. Explaining that he came from a working-class background (his father and two brothers were coal miners), Graham said that this background had influenced his attitude toward writing fiction. He does not regard it as a "priestly calling, but more like a job." You go to the job, you do it whether you're in the mood or not, and you make steady progress. That is, he said, "the industrial method of writing fiction."

Graham's prose -- witty, polished, and sophisticated -- is anything but industrial. But his attitude is echoed by nearly every successful writer I know. In addition, his situation points up another facet of the writing life: writers come from all sorts of backgrounds, not all of them literary. When Graham's first novel came out, he reports, this exchange ensued:

Father: What's your book about, then?

Graham: It's about dreams.

Father: Dreams? What are you on about, 'dreams'?

Graham: It's about dreams and what they mean.

Graham: It's about dreams and what they mean.

His father should have written a book.
-- signed,
Another blue collar writer dude

So much for dream analysis -- I'll have to tell my therapist.

That's the best description of dreams I've ever read.