Last night Connie Willis spoke at the University Bookstore in Seattle. As always, she captivated the crowd. Her speech ranged over an amazing array of subjects: writing, Bristol Palin, technology and the future of books, her new kittens, air travel. Here is Connie, holding forth: 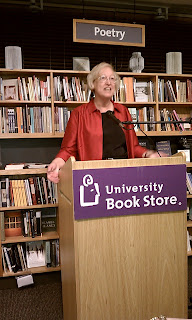 One thing she said about writing especially caught my interest. The book she is currently working on is about Area 51. Connie said that every time a new book comes out on the subject she catches her breath, wondering if it will cover her territory before she can finish the novel (she is a famously slow writer). Upon reflection, however, she said she realizes that is not going to happen, and for a specific reason. Most subjects and plots have already been written about many times (certainly in SF, UFOs have!), and so when writers do them again, the trick is to combine the subject with other subjects. What is new is the combination. Connie said that her particular combination is "probably" new: UFOs, romantic comedy, and the Liberace Museum.

I don't think there can be any doubt.

But the point is intriguing. My Nebula winner "Fountain of Age" was about the quest for immortality and a single person who already has it -- a very old SF theme. But I combined it with the Romany people, a protagonist in his 90's, and romantic obsession -- possibly a combination not before attempted. As I thought about other successful stories, mine and those of other writers, I realized that they, too, often feature unusual combinations of elements. Two examples: China Mieville's THE CITY AND THE CITY combines the noir police procedural with the concept of cultural willful blindness. Mary Robinette Kowal's SHADES OF MILK AND HONEY combines Jane Austen's Regency world with delicate minor witchcraft.

The combination must be made plausible, of course, and all good fiction (in my opinion, at least) depends upon interesting characters. Still, Connie's observation is an intriguing one, worthy of further thought.
Posted by Nancy Kress at 8:41 AM

Another SF writer who shares your views:

"...science fiction is the literature of odd juxtapositions: you take two things that don't normally go together, and you get something new out of them. Often it's two completely different sciences."