A Concern of Taste, or Literature, or Something

Two months ago I wrote a very long novella (38,000 words) called "Before the Fall, After the Fall, During the Fall." It will be published by Tachyon Press late this year, or perhaps next year, as a stand-alone book, in the same manner that Tachyon published James Patrick Kelly's BURN and James Morrow's SHAMBLING TOWARD HIROSHIMA. My novella features, as part of the story but not in close-up or affecting the protagonist directly, a tsunami hitting Japan. I did my research; the tsunami starts with an earthquake on the same fault line that spawned the real quake a few years ago, although in a slightly different way, so that the main wave hits Tokyo. Still, the effects are similar and the coincidence is ghoulish.

Here is my concern: Does it look exploitative or tasteless to leave my tsunami in the story, given the monstrous suffering occurring right now in Japan? Nobody will know I wrote that scene before, not after, this real-life tragedy. It wouldn't be hard to move my tsunami to another place around the Pacific Rim. Should I do so?
What do you out there think? Help me sort out the issues of exploitation, taste, and honesty involved, because I can't seem to decide.

It starts at Comic-con in San Diego, which two British fans, Graham and Clive, are attending as the culmination of a life-long dream. Meet the artists! Buy the comics! Come in costume! Extending the dream, the guys then rent an RV and head for Area 51. I loved these guys. The film makers understand our culture. They are bright, decent, enthusiastic, literate, and clueless.

On the trip, they meet up with the alien who crashed in Area 51 in 1947. He has escaped the government, calls himself Paul, and needs a ride to a location he won't reveal. Of course, the feds are chasing him. The movie is a spoof of ET, CLOSE ENCOUNTERS OF THE THIRD KIND, and MEN IN BLACK, itself already a spoof. It has delicious bits such as the scene in which Graham asks Paul what he's been doing all these years. "Well, a bit of consulting, for one thing," he says, and we get a drop-in of Paul sitting across the desk from a shadowy figure and saying, "You could do it this way, Mr. Spielberg..."

I saw the movie with a teenage friend who missed a lot of the SF references which I thought hilarious. On the other hand, she didn't mind the stupid raunch -- bathroom jokes, homophobic digs, fart humor, etc. that for me marred an otherwise enjoyable romp.

Cranky at the Movies

First -- apologies for not blogging for so long. I was without Internet access for a week while closing out my just-sold house, a sobering experience. We don't realize how wired-in we are until we're not.

But I did go to the movies a lot, including the new contemporary fantasy, ADJUSTMENT BUREAU. In this film, an "Adjustment Bureau" of super beings invisibly keeps humanity from going to pot by discreetly nudging human affairs as necessary. Complete free will, after all, has not served the world very well. One "agent" explains that the last time it was tried, Europe slid into the Dark Ages. Hence the supernatural interference from time to time.

The current interference is to prevent two characters, a budding politician and a gifted dancer, from getting together and falling in love. If they do, we're told, [NOTE: SPOILER ALERT] they will so distract, content, and otherwise fulfill each other that he won't go on to be an influential president of the USA and she'll won't revolutionize dance. So the movie becomes a struggle between the two to find each other again and the Bureau to keep them from doing it.

This is amusing enough, and so is the look of the Bureau: all dark wood desks, shaded green lamps, and conservative dark suits, as if in a 1950's bank. The movie manages to use these contrivances to set up a real question: Which matters more, private love or the greater social good? It's a question that has driven much greater literature (ANNA KARENINA, AGE OF INNOCENCE). Given its romantic and limited parameters, the film sets this up convincingly.

And then it backs off.

The ending should, to be honest, choose either love or duty and then show the consequences of that choice. Had it done so, it could have been a highly interesting and controversial piece of art. But, like much of American culture, it takes the easy way out, with some platitudinous hokum about "the Chairman" being so impressed by the couple's love that He (or She -- this is left deliberately vague) will rewrite the entire Plan for all of humanity just so the lovers can be together. Too bad. What started out as what fantasy can do superbly well -- set up thought experiments on big issues, using characters we care about -- degenerates into drivel and pap.

Not recommended unless you walk out 7/8 of the way through.

Several years after everyone else, and in the name of research into current YA novels, I finally read Stephenie Meyers's mega-bestseller of vampire love, TWILIGHT. I finished it with very mixed reactions.

First, if I had been given this book at age 13, I would have loved it. At 13 I read absolutely everything that came my way, and with an absolute lack of taste or discrimination. I would have fallen for the book's central theme: A gorgeous guy falls totally and almost instantly in love with a normal girl, loves her romantically and unconditionally, saves her life over and over, and would risk anything for her. As she does for him. No one else in the world can disrupt their love; no one else even matters much. My overly romantic 13-year-old soul would have thrilled.

But I'm not 13. And so I was put off by that very excess of romanticism; real love does not occur instantaneously; other people and pursuits do matter; no love is unconditional, and shouldn't be. Edward now seems to me not romantic but creepy: breaking into Bella's house to watch her sleep, obsessing over her every move, all but stalking her. She seems to me immature in her disdain for everyone but Edward: the "friends" she makes at school, the father who gives her a home and tries to please her, the entire Olympic Peninsula. The vampirism, in fact, seemed to me more believable than the relationship.

Nor did I like the writing much. Characters seldom just say something: they "growl" it or "decide" it or "agree" with it (even when the dialogue already carries agreement). Everyone glares a lot; that seems to be the author's favorite verb. Meyers isn't bad at description of weather and landscape, but the only words she can find for Edward, used over and over, are "perfect," "magnificent," "gorgeous." He even has a "crooked smile."

Yet millions love this book. They can't all be 13. Go figure.

Yesterday Jack and I drove back from the Rainforest Retreat. It had, uncharacteristically, finally stopped raining. The retreat was a satisfying experience; I wrote 6,500 words (a paltry amount compared to many others). I got to have dinner or chat with friends: Jim Van Pelt, Patrick Swenson, Brenda Cooper, Louise Marley. I won four games of chess against Bob Brown and lost two. I got to see the world's oldest spruce tree, 1,000 years old and 58 feet in circumference. That tree stood there during the Crusades, the Renaissance, two world wars, and the birth of Facebook. I took no picture: It was raining.

Now tomorrow I fly to Buffalo to see my family and to -- finally! -- sell my house. It was on the market 16 months, and I am selling it for less than I paid for it, but at least I was able to find a buyer. I had had visions of it just sitting there unsold for a thousand years, during more renaissances and more wars and the birth of who-knows-what form of social networking.

A study quoted on TV last night: People with huge numbers of Facebook friends experience more anxiety and social tension than those with either a small number or no Facebook presence at all. Evidently all that information can be difficult to keep up with, creating anxiety. Or something. (Possibly related note: The spellcheck on Blogger does not recognize "Facebook." It gives me "Forsook.")

It is snowing in Buffalo. I cannot escape precipitation.

This weekend is the first of two writers' retreats, both called Rainforest Retreat, that Patrick Swenson is running in March on remote and beautiful Lake Quinalt. The retreat is held at a lodge in the world's only temperate rain forest. It has not stopped raining since Jack and I arrived on Thursday. This actually makes good sense because there is nothing to do except stay inside and write, talk to the other writers about writing (when they're not writing), and watch it rain. Here is Lake Quinalt from our cabin in the 15 minutes when it only threatened to rain: 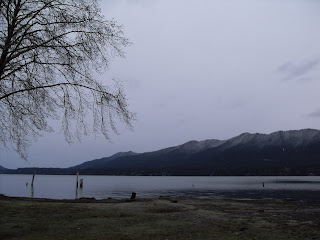 People work in their cabins or in the large central building, which the rest of the year is a restaurant and bar. There is a daily word-count log, which Jay Lake appears to be winning. Brenda Cooper hard at work: 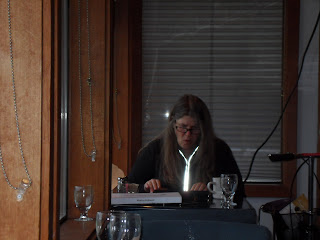 There are also presentations. I did one today on world-building; Jim Van Pelt did one yesterday on narrative time; tomorrow lawyers Alex Tillson and Elizabeth Stephan will talk about legal issues for writers, a session I'm eager to attend. Louise Marley leads twice daily yoga classes, which so far I have not been able to attend since during the morning class I was writing and in the evening one playing chess. Here are Brenda Cooper, me, Jack, and John Pitts talking about "Breaking Into Print:" 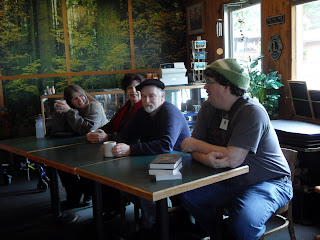 Lodge decor is rustic. A statue of a bear carved with chainsaws greets restaurant patrons: 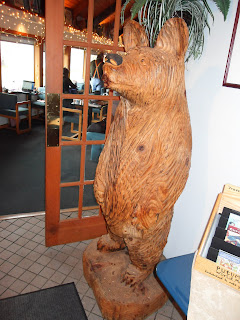 People come here from as far away as Florida. There is a whole contingent from Calgary. It's fun, after writing all morning or afternoon or evening or all three (you know who you are) to have a casual dinner with other writers, or shmooze in the bar, without having to make prior arrangements and then drive all over creation to meet up. Now if only it would stop raining...
Posted by Nancy Kress at 10:30 PM 2 comments: