On Sunday Connie Willis spoke about and signed her new novel, BLACKOUT, at the University Bookstore in Seattle. In attendance was a large and enthusiastic crowd. Connie told story after story about the setting of the novel, the London Blitz. Among the information new to me was the fact that Hitler, if he could successfully invade England, planned to erect a gallows and hang the king and queen in front of the House of Parliament. Also Princesses Elizabeth and Margaret Rose, then 14 and 10 years old.

As Connie spoke, I thought about a comment I heard recently from a student: "I had a good idea for a story and I started it, but then I discovered that X wrote a story on the same topic, so I stopped." How many stories and novels have been written about World War II? Too many to count. But a determined writer can always find a new way to tell the story, as Connie has done. No one should be stopped from writing about any topic they choose just because someone else's footprints are on the terrain. Any fictional idea is not a tiny patio; it's a trackless jungle. Grab your machete and start hackin'. As for me, I've been thinking about this guy whose father was murdered in Elsinore Castle...

Here is Connie. That's not a book she's holding but a dog (in case there was any confusion): 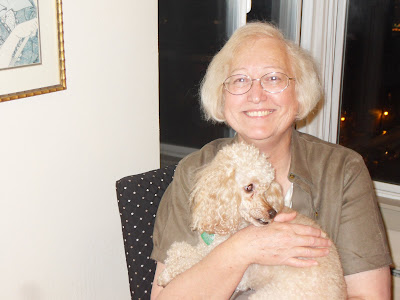 Never could have happened. Connie Willis is a wonderful writer, we all know that. But there is no way on Earth the Wehrmacht could have mounted a successful invasion of
Britain. Leave aside the RAF and the Royal Navy (who would have died to the last man).

The problem is logistics. Hitler's army gets a foothold in South England? How would they be resupplied?

The US built an =enormous= supply train to support the Marines in the island-hopping campaign. America had the industrial base to do it.

I put off writing Eifelheim for several years because Connie had written The Doomsday Book.