Things really got underway today in Austin with a reading by Joe Lansdale. In his rich Texas accent, Joe read three short pieces and then told stories about his daddy, an oversize Texan given to saying things like "We were so poor that if it cost a quarter to shit we would've had to throw it up." This entertaining half-hour was a highlight of the day. 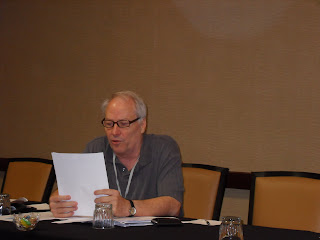 I did four hours of programming: two panels, an hour of steadily signing books (astonishing for such a small con), and a "Toastmistress Interview," during which I answered questions asked by the very capable Elspeth Bloodgood in front of a small but appreciative audience. Throw in chatting in the con suite and hallways, and by evening I was hoarse. The atrium of the con hotel: 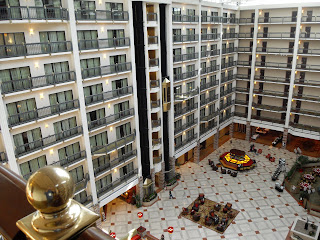 Dinner cured my hoarseness. Maureen McHugh, Nebula-winning local author, organized a trip to eat Texas barbecue at Rudy's, which is also part gas station. Long wooden tables, concrete floors, oiled sheets of paper as plates, the best creamed corn I have ever had, and slabs of various meats -- brisket, ribs, sausage, turkey -- served with Rudy's own barbecue sauce. It was delicious, and different from the more vinegary Carolina barbecue I am used to. However, the one Vegan among us was reduced to dining on a bag of potato chips. She came along for the company. 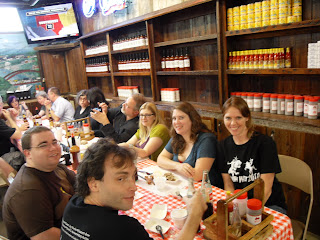 Here is Patrick Swenson, laboring away in the Dealer's room: 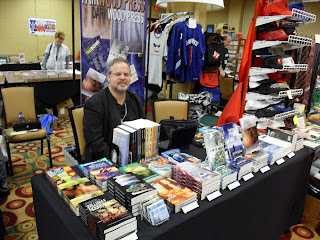 Back at the hotel, Kasey Lansdale, Joe's daughter, was giving a concert of country and western music. I love C&W and Kasey, a professional singer, was very good. Alas, the sound system was not.

The day finished in the bar, drinking apple martinis and listening to the piano player. Meanwhile, Leslie reports from Seattle that she is taming Cosette, the Terrible Tiny Poodle, through a combination of water bottle squirts, rewards, intensive attention, and a run in the dog park. Leslie's hand has stopped bleeding. But Cosette and Les's poodle still attack each other.
Posted by Nancy Kress at 7:06 AM

Reading this gave me a weird feeling... See, Joe Lansdale is a writer who I admire. I also met him once when I was in my twenties, and that was when I decided not to make a point of meeting writers I admire. He was fine, I wasn't.

And Maureen McHugh is another writer who has special meaning to me. I read China Mountain Zhang when I attended my brother's funeral on the east coast, and it was a source of comfort. I've also had a couple of internet exchanges with her about cooking.

So I've studied with you, met him, commented on her website, and all of a sudden it feels as if I've got some tenuous connections with a larger world.

Re, NO SMILEY FACES.

This is from THE WITCH IN THE WAITING ROOM--A Physician Investigates Paranormal Phenomena in Medicine, by Robert S. Bobrow, M.D., Thunder Mouth Press, 2006

"In one study done at an arthritis/pain treatment center in Florida published in SOUTHERN MEDICAL JOURNAL in 2000, patients with rheumatoid arthritis (a nasty affliction of joint inflamation) appeared to be helped by in-person intercessory prayer, but not by prayer from further away. In a more recent (2001) report from an outpatient facility in Miami, intercessory prayer was tried with kidney-dialysis patients. It did not make a difference, although patients who =expected= to be prayed over did better than those without this expectation. (Optimism is usually a good thing.)