My sister Kate Konigisor is currently starring in MACBETH as part of the Shakespeare in the Park program in Buffalo, New York. No, she is not playing Lady Macbeth -- she is playing Macbeth. The director has mounted an all-female cast in the Scottish play, because "there are so many really good actresses out there and so few really good female parts."

Macbeth is a good part for anyone. Kate says it is the best part she has ever played, or ever expects to play. Certainly Shakespeare gets tricked out in all sorts of weird ways in the search for novelty, but the only weird thing about this production is the three sisters. After about fifteen minutes, the large and enthusiastic audiences seem to forget entirely that these are not men up there on stage playing warriors. The cast becomes no more and no less than the characters, and even the fight scenes, with lethal-looking broadswords, play to Shakespeare and not to novelty.
And my sister is wonderful. Okay, yes, I'm biased -- but all the reviews of the play have said the same thing. Here she is: 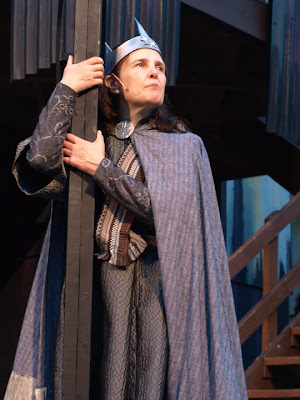 Yea and verily, "Something wicked this way comes."

I suppose _broadswords_ are appropriate for an all-woman show.

What a lovely reversal.

Since in Shakespeare's day, all female parts were played by young men, there is very little 'sex' in his plays (his audience was well aware of the convention) - which makes it perfect to use all women!

And actors were the ones with the emotions and the ability to project them, which makes it work even better.

FABULOUS OPPORTUNITY OF GETTING AROUND 20% OF MONEY BACK ON YOUR PURCHASE TROUGH ONLINE SHOPPING.SO WHAT YOU ARE STILL WAITING FOR ? SHOP ONLINE HERE.YOU CAN REGISTER HERE FOR FREE.
ENJOY ONLINE SHOPPING.
HURRY UP