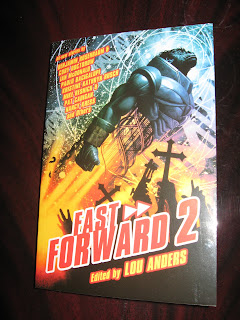 Today's mail brought my contributor's copy of Lou Anders's new anthology, Fast Forward 2. This is a science fiction anthology, no fantasy. It contains stories by a wide range of new and veteran writers, including Ian McDonald, Jack Skillingstead, Kay Kenyon, Jack McDevitt, Paolo Bacigalupi, and Mike Resnick and Pat Cadigan (collaborating). My story, "The Kindness of Strangers," may be one of the bleakest I've ever written. Or it may not. It all depends on your viewpoint about what the Earth can or cannot sustain.


In his Introduction, Anders quotes several people on the fate, intent, and importance of SF in general. He points out that although SF doesn't have a very good record as a predictive literature (which was not its aim in the first place), it may be doing better as a "preventive literature." In other words, the cautionary tale, which alerts us to what could happen if "this goes on," may help ensure that "this" does not go on. 1984 ended up looking nothing like Orwell's 1984 -- but it gave the words "Big Brother is watching you" to the language, which raised all our consciousness about just how much we don't want Big Brother watching us.
"The Kindness of Strangers," in a far more modest way, is that kind of story. Despite its bleakness, I'm fond of this one.
Tomorrow I fly to Tampa in connection with another bleak story. Five hundred students at the University of Southern Florida have been required to read my novel, Nothing Human, for their English class. I'm going to talk to them about being a (bleak) writer. So the next blog will come from sunny Florida, which is forecast to have rain the whole time I'm there.
Posted by Nancy Kress at 10:41 AM

Huh. How long will you be in not-sunny Central Florida for? Doing any non-university-related events?

I'm only there a day and a half. No, they didn't set up any public events for me this trip.

What a coinkydink, I just Blogged a post about reading Fast-Forward #1(among other things)on my Blog ten minutes or so ago. "Solomons choice" looks pretty good.