J.K. Rowling's awaited first novel for adults, THE CASUAL VACANCY, is a surprise.  Several surprises, not all good.  But not all bad, either. 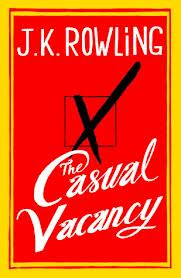 The first surprise is how grim the book is.  Pagford is a picturesque English country village, something Jane Austen might have used as a setting.  Beside it, however, is an extension of the city of Yarvil, a depressed area called "the Fields" that mostly consists of slums, out-of-work inhabitants, and a methadone clinic.  The Pagford Parish Council is divided on whether or not they should redraw boundaries to hand the Fields back to Yarvil and close the clinic (which is renting a building owned by Pagford), or instead try to help--with money and scholarships-- the disadvantaged inhabitants of the Fields.  In Chapter 1, a key member of the council dies, and the vacancy leads to an election that ends up exposing everyone's deepest secrets and personal bad behavior.

And it IS bad.  I didn't expect Harry Potter-type buoyancy and heroism, but nearly every character in THE CASUAL VACANCY is unpleasant, taking most of their pleasure from others' weaknesses, failures, frustrations, and pain.  Nearly every one!  These are not merely flawed characters; they are petty and actively vindictive.  And some are worse than that, including a man who beats his wife and kids, a crack addict who neglects her children, cyberbullies, and three--not one but three--teenagers who cruelly and publicly humiliate their parents. And one character, Krystal, is so wrenching that the only possible response to her is a painful pity.

The second surprise, however, was that despite all of the above, I could not put the book down.  The writing is good.  More, the story kept me enthralled to see what would happen next and how the various plot lines would turn out.  I neglected a lot of other things I was supposed to be doing in order to finish this novel.

Rowling has moved a long way from what Jane Austen would have done with an English village.  Masterly Jane knew that every setting has at least a few moments of joy, at least a few relationships that are tender, at least some people who strive for higher standards of behavior.  Rowling has said that some of her book came from her own life and the lives she observed before she became famous.  If so, her upbringing must have been a doozie.

Still--I read, I read compulsively, and I believed her characters.  I just wish they hadn't been the only inhabitants we meet in Pagford.

What's your response to this observation (from a review that appeared in The Guardian):

"No one, I suspect, reads Rowling for the beauty of her sentences but there is often a sense here that the language is not quite doing what she wants it to do. One character, we are told, "hated sudden death". Who doesn't? The metaphors regularly run away with her. One character's sexual performance was "as predictable as a Masonic handshake". What's predictable about that?"

I don't know what Nan thinks of this reviewer's comments, but from these examples I'd say he's being too nit-picky. I kind of like the Masonic handshake line.

I think he's over-reaching his comprehension level. The "familiar as a Masonic handshake" means it's always performed the same way, as is this couple's sex. The "hating sudden death" is explained in the rest of the paragraph in opposition to lingering death, which is preferred because there is a chance to say good-bye. I thought Rowling's prose was fine.