Yesterday the annual Locus Awards were held in Seattle, combined with the induction ceremony for the SF Hall of Fame at the Science Fiction Museum. It was a very long day, and an intensely interesting one. Many writers had come to Seattle for this: Michael Cassutt, Gardner Dozois, Walter Jon Williams, Maureen McHugh, Ursula LeGuin, Mary Robinette Kowal.
The day began with two panels. Connie Willis, Walter Jon Williams, Ursula LeGuin, and I did a panel on "The Research Behind the Science," moderated by Gary Wolfe. I don't think we said anything the audience hadn't heard before, but for me, sitting on a panel with Ursula, whom I have admired for decades, was a tremendous thrill. She is over eighty now and looks frail, but holds her own admirably in a discussion. Here we are, after discussing how much research to conduct and what to do with it after you've got it: 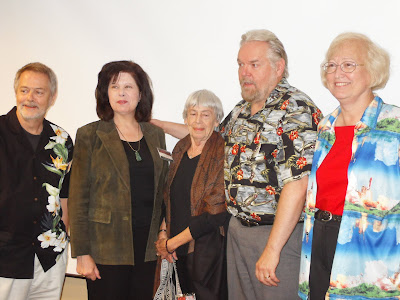 Next came an editor's panel on "Ten Mistakes A Writer Should Not Make." This produced no useful information whatsoever, unless someone needed to be told "Don't slug your editor at a SFWA reception," but the panel did produce much hilarity. The panel consisted of Gardner Dozois, Eileen Gunn, Gary Wolfe (moderating), Beth Meachem, and (unaccountably out of the picture) Jeremy Lassen: 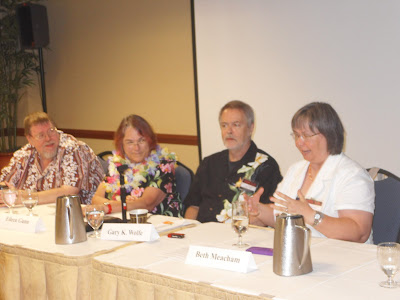 An autographing session followed, and then the lunch banquet. This was accompanied by Connie Willis conducting the traditional Hawaiian shirt contest. Charles N. Brown always wore Hawaiian shirts, and Connie began with a tribute to him. The finalists in the shirt contest are grilled by Connie: 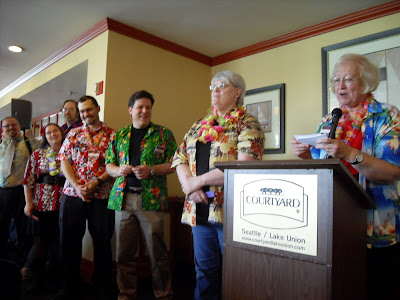 Ted Chiang, for the upteenth year in a row, refuses to wear a Hawaiian shirt and is duly chastised by the implacable Toastmistress... 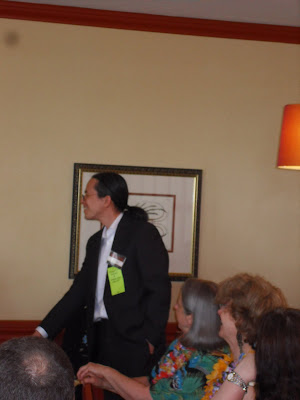 ... while Gardner Dozois expresses fierce opinions on the proceedings as a whole: 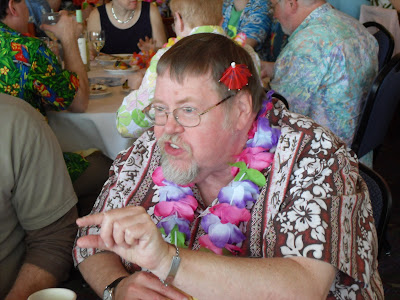 The Locus awards were presented and accepted. A brief interval for everyone to catch their breath (many did this in the bar) and then on to the SF Museum. Inducted into the Hall of Fame were writers Richard Matheson, Roger Zelazny, and Octavia Butler, and special effects wizard Douglas Trumbull. Michael Cassutt, emcee, gracefully kept the speeches and film clips moving. Since it was dark in the museum theater and I have a cheap camera, none of the pictures I took came out as more than a dark blur. Doug Trumball could have fixed that, but he was a little busy.
More partying in the evening. I don't know how long it went on because I, worn out with talking for twelve straight hours, gave up and went home.
Posted by Nancy Kress at 7:17 AM

I'll have to remember not to punch my editor at a SFWA meeting. Worldcon, maybe. But not at SFWA.

Oh, DON'T punch your editor. All this time, I've been doing it wrong.

So, what if you're a new writer* who doesn't have an editor yet? Who do you not punch then?

I'n not an expert in this kind of thing, but all the photos seem to show a desperate crew indeed.

I wouldn't care to get within blaster range of any of them.