Last night we had a bear in the parking lot. I did not see this bear, but apparently it ambled slowly along, fairly close to the lodge. Below the parking lot is the Rio Hondo, a six-inch flow of water that in the East would barely merit the name of "creek," let alone "river." But bears like this ridiculous river, so perhaps we will get more. A ranger told Walter that the animals are active this year. Here is the Rio Hondo: 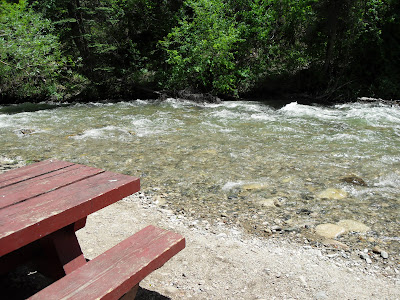 The workshop resumed work. We critiqued two of the new, second-week stories, from Lawrence Schoen and Barbara Webb. I lectured on the uses of effective description. Walter gave a very useful talk on the Three R's of plotting: raising the stakes, reveals, and reversals. In the evening, individual student conferences began.

But mostly there was a lot of writing. The deadline for stories is tomorrow, so people were hunched over computers in the common area, in their own rooms, even on the balcony despite an unseasonable cold snap. Everyone is trying to incorporate what was learned in Week 1 into stories for Week 2. Some memorable quotes from yesterday's critiques:

"Introducing a virus at the climax of the story strikes me as a Deus Ex Chemistry Set."