Charmed At the Movies

"Tell me what a man likes and I will tell you what he is," somebody said a very long time ago. I had only a mild liking for THOR. But the movie I saw last weekend captured my heart. 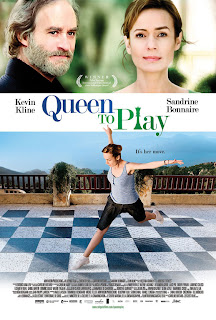 It's QUEEN TO PLAY (in French, with English subtitles; the French title is JOUEUSE). It's about chess, although that's not why I liked it. The chess games are never clearly presented, probably because a film full of chess positions would baffle or bore 98% of the audience 98% of the time. This movie is about people.

Hélène, a chambermaid at a small hotel by the sea, glimpses a vacationing couple playing chess on the balcony. The woman -- sensual, confident, absorbed in something challenging -- is everything that Hélène is not, and would like to be. She has her hair cut like the woman's, but that makes no difference at all. She acquires a satin nightdress like hers, but Hélène's husband doesn't even notice. What Hélène needs is not a superficial make-over, but a passion. She learns chess, the thing that attracted her to that balcony in the first place.

How she does so, what she learns along the way, and how Hélène's passion transforms every relationship in her life, is the substance of the movie. Chess is not without its dark side. Many of its champions were at least partly mad (Paul Morphy, Bobby Fischer) and some of its adherents became so drawn in they abandon the rest of their lives (Marcel du Champ). Hélène, however, does not become lost to ambition or gain the World Championship or destroy others' happiness -- this is not THOR. QUEEN TO PLAY is a delicate, wry, humane film about change, and it stays on a human level. Sandrine Bonnaire as Hélène and Kevin Kline as her chess teacher are both superb. See this movie.

On your recommendation, I shall go watch this movie.

Yep, saw it over a year ago at an NYC screening and fell in love with then. It's a gem.

It is really pleasure for me to read your blog. Hope you will provide more article for us.Petter Joe