Last night was the first of the Clarion Reading Series at the University Bookstore, in which each week's instructor at Clarion West reads from his or her work . John Kessel read from a story that will appear in Gardner Dozois's anthology THE NEW SPACE OPERA 2. John, usually a literary writer, said he had always wanted to write at least one SF story of the kind he enjoyed as a kid, "full of battles and heroes and derring-do." So he did. The story was great fun, and when it was finished, I'm sure there's not one of us in the audience who didn't want a secret nine-dimensional pouch with a fold-up soldier of our very own. Afterwards some of us had dinner at a Greek restaurant. Here are (left to right) John Kessel, playwright Jeanne Beckwith, and Ted Chiang: 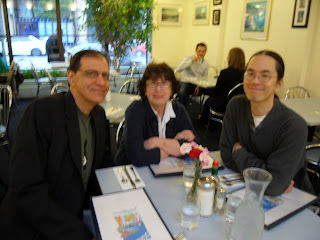 As a sidelight, the reading illustrated a common problem writers have: What if you want to read a piece too long for the allotted time? John's solution was to edit ahead of time, marking those places he would read verbatim and those places he would summarize ("And then a bunch of exciting stuff happens"). For very long pieces, this may be the only way to go. I'll consider it the next time I want to read "The Erdmann Nexus" or "Act One" in public.

John Kessel is a pretty good reader of his own stuff.

However, after his intro where he warned us this was a crazy guy who heard voices, I was hoping for a little crazier voices. But maybe I'm biased by living across the street from a paranoid schizophrenic who hears some really strange voices.

That's exactly what I do when I want to read the beginning, middle and end of a story that's too long to read in its entirety. Sometimes my reading "script" of a story is much different from the published version, so extensively have I edited it. Maybe I learned this from Kessel, come to think of it; that's where I learned most everything else. -- Andy

Hi, Andy! But I thought you'd learned stuff at Clarion from ME... :)