Saturday combined the annual LOCUS Awards with the annual induction of Science Fiction Hall of Fame honorees. It was a very full day, starting with panels and ending fourteen hours later with drinks in the bar of Seattle's Courtyard Marriott. Some highlights:

During my interview of Connie Willis, she explained the importance of ironing as a means of calming Writers' Nerves. AND you get wrinkle-free clothes!
Michael Whelan's interview, conducted by Todd Lockwood, contained a moving account of how he "painted my way out of depression" with a picture, which he still has, of a stairway leading out of darkness into light.
On the short-fiction panel, Gardner Dozois explained the "sure-fire, guaranteed formula for becoming a famous SF writer. This is it: Write five or six wonderful stories, save them up till you have all six, then send them to a single periodical in short bursts so that they all appear within a year and a half. This creates enormous buzz among fans, reviewers, and book editors." Gardner allowed as how the first step is the hard one. Reactions by Gordon Van Gelder, Gary Wolfe, and Ellen Datlow were less than serious: 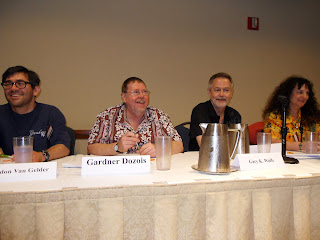 The traditional Hawaiian Shirt and Trivia Contest, conducted with aplomb by Connie Willis, and won by Greg Bear. Connie with daughter Cordelia: 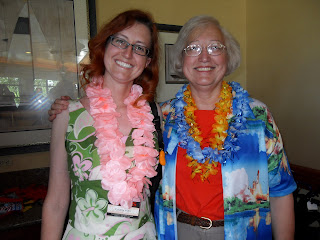 Paolo Bacigalupi's acceptance speech for his LOCUS award for his short story "Pump Six." He did something I have never seen before: He thanked the editor who rejected the story (Gordon Van Gelder), because after it was rejected, he worked on it more and "finally got it right."
Connie Willis's moving speech when she was inducted into the Hall of Fame, along with Michael Whelan, Ed Ferman, and Frank R. Paul. Connie said there are things you fantasize about and things so wonderful you never even think to fantasize about them, and this was the latter. Afterwards emcee Christopher Moore said, "Look, guys -- you made her cry." Here are Connie, Charles N. Brown, John Kessel, and Michael Whelan at the Hall of Fame: 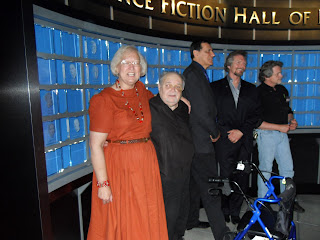 Dinner with Karen Joy Fowler, Paolo Bacigalupi, Ted Chiang, John Kessel, Jack Skillingstead, and Gary Wolfe, during which there ensued a discussion of "hilarious ways to die." The winner was being crushed by a rising piano while having sex on top of it (see http://www.aintnowaytogo.com/pianoSex.htm for verification). There was no reason this should have been a hilarious discussion -- but it was.
Sitting around the bar listening to Ken Scholes play the guitar and Amelia Beamer sing: 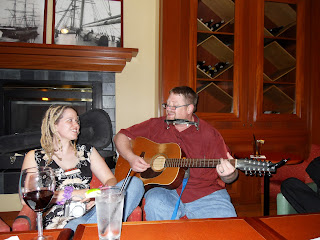 Altogether, a lovely occasion. Even if I lost the award.
Posted by Nancy Kress at 12:46 PM

Nancy, you didn't =lose= the award. Another writer =won= it.

And everyone here loves you and your fiction, awards or not.