My novel DARK MIST RISING is now available on the Nook and the Kindle, attractively priced (I hope) at $3.99. But why, you ask, if this is my latest novel, does the cover say "Anna Kendall"? Therein lies a publishing tale. 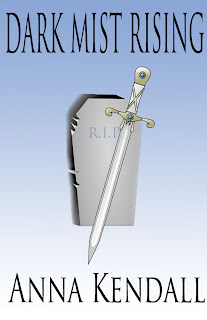 Over the past three years I wrote a YA fantasy trilogy, not because I made any planned decision to switch from SF to fantasy (my career never seems to involve planned decisions) but because this scruffy kid kept tugging at my mental elbow going "Write me! Write me!" So I did, beginning with CROSSING OVER, continuing through DARK MIST RISING, and ending with A BRIGHT AND TERRIBLE SWORD. CROSSING OVER came out in the United States and England, and will be published this summer in Germany, France, and the Netherlands. The four European countries bought the entire trilogy; Viking bought only CROSSING OVER, which was also slightly rewritten for the American market (the original was deemed too dark). Now DARK MIST RISING is available in England, and I am creating it here as an original e-pub. Will anybody buy it, or even find it? I don't know, but I like this book and wanted to at least offer it somehow.

The set-up is this: Roger Kilbourne can cross over into the Country of the Dead. He isn't thrilled about being able to do this, and with good reason: Everybody and his brother attempts to exploit his gift. Not only that, the poor guy gets caught in the cross-fire of a war that has been going on for quite a while, between forces battling for control of both the Country of the Dead and the more prosaic land of the living. Roger has an unrequited passion for a girl far above his rank, the devoted love of a girl he doesn't value enough, mentors he doesn't want, and a savage chieftain (living variety) with good reason to want his blood.

I think the second book of this trilogy is better than the first. This is a problem I have with my trilogies; it sometimes takes me a while to get my bearings firmly in a new locale. (I also think PROBABILITY SUN is better than PROBABILITY MOON, and it was the third book, PROBABILITY SPACE, that won the Campbell.) Of course, I'm only the author. My hope is that you will read DARK MIST RISING and decide for yourself.

... CROSSING OVER, which was also slightly rewritten for the American market ...

Oh darn. I read the American edition of "Crossing Over" and have just finished listening to the audio version of "Dark Mist Rising". So two questions:

1) Briefly, what was the content of these slightly rewritten passages?

2) When will "A Bright and Terrible Sword" become avialable stateside?

And you are correct: "Dark Mist Rising" was a much stronger and more intense novel than "Crossing Over" and I am now very eager to find out how your story concludes.

Ditto on Mark's comment, reading that makes me want to read the original version. Any chance of getting the original out as an e-book? I'd sure like to read the entire trilogy. I've also kept checking to see if the Probability series in in e-book on the Nook, but I'm not seeing it and would love to pick it up again.

Thank you! The American version of CROSSING OVER played down a dark element of Soulvine Moor, but I'd rather not say what it is because that would be a real spoiler. I think the British e-version is available on amazon.uk, but I'm not positive. I can't put up BRIGHT AND TERRIBLE SWORD on e-pub until after it comes out in Great Britain next year. I do own the rights to the entire PROBABILITY series, and that will be my next e-pubbing project.

... The American version of CROSSING OVER played down a dark element of Soulvine Moor ...

Being coy, I believe I can guess to what you are alluding, since that dark element appeared to come out of nowhere when I listened to "Dark Mist Rising".

Going by Amazon.co.uk it will be around April of next year when you can release B&TS to your U.S. constant readers, correct?

i never understand established writers writing under another pen name. for example, if it wasn't the digital age and I hadn't stumbled upon the information that you're also Anna Kendall, i would not have bought any books written under that name.

i've bought all your books written under your own name. just telling you writing under another pen name might affect sales of your book negatively.