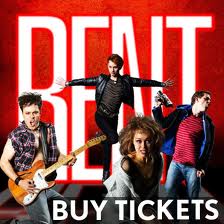 So I left the theater cranky.  And definitely too old for this show.  I wanted to say to everyone on stage: Just pay your damn rent!
Posted by Nancy Kress at 9:29 AM

I never saw the entire movie beginning to end, but saw bits of it and loved the music -- EXCEPT there is part of one song where they all laugh about throwing some lady's dog off the balcony, presumably because it barked too much. I can't go back and watch the whole thing because characters who think that's funny are completely unlikeable to me.

This won't really affect your impression of them, but unless the movie changed something, this one character was paid to play her drums until this high strung dog jumped off the balcony. They didn't throw the dog off...it was more of a black comedy moment.

But none of the characters are supposed to be saints--far from it, they're all quite flawed. I mean, aside from Collins and maybe Mark (whose flaw, at least on Broadway, was weak as flaws go).

IMHO--I haven't seen the movie, so maybe they changed things a ton.

P.S. part of the wackiness of it--the dog turns out to be the dog of the wife of the quasi-antagonist of the first half.

i didn't see the movie. i saw the play, which may or may not be the same in details.

Whoops, sorry, my comments were really for Amy. I have the movie but saw the musical on Broadway (presumably similar to what you saw, Nancy)--I need to get around to watching to movie to see how it differs....