One of the pleasures of living in another country is the chance to notice all the small differences. Such, for instance, as doors. Germans love doors. In the university library, there is a large room, opening off the mezzanine at the top of a wide staircase, where all books are checked out and in. People go into and out of this room at the rate of one every 35 seconds (I timed it) and every single one opens and closes the door. In America, this door (if it existed at all) would be propped open all day. Every other room in the library also has a door which is constantly opened and closed. When my students come to see me in my office, the first thing they do is close the door. The office of the Institute secretary has a door that, when she is there, is opened two inches to indicate her availability.

Thus, I was surprised whem, at a dinner party on Saturday night at the home of a German colleague, there were no doors between the kitchen and the dining room, or the dining room and living room. I asked if doors were not usual in German homes. She said yes, they are usual, but she had them removed. She'd lived three years in Berkeley.
Toilets: On the streets are small public toilets (see below). These are useful and surprisingly clean. The same idea was nearly installed in New York, but because the tiny buildings didn't permit handicapped access, the entire project was scrapped, on the theory that if everyone can't have it, nobody can. Leipzig is very good about handicap access -- there are ramps and elevators everywhere -- but not as stringent as the States. 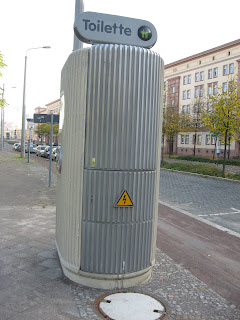 I first visited Germany in 1963, when I was but a young'un of 10. Still recall that the doors had =handles= instead of knobs.

Seattle installed 5 similar toilets that were handicapped accessible. Unfortunately, they turned out to be a magnet for crime, drugs, and weren't very clean either. The city finally removed them this year.

That's what happened in NYC. If the toilets were large enough for wheelchair access, they were large enough to use as drug dens. If they were small enough to discourage drug deals, they were too small for wheel chairs. The Germans, the French, and others found the convenience of the public toilets outweighed their lack of handicap accessiblity. They would serve 99% of the people. In the US, if it can't be everyone, it can't be anyone, and so rather than inconvenience a few, we inconvenience all.

I once made the observation in Vienna that most of the city would be illegal under US law, meaning things like railings on stairs, handicap access, etc. At an Hungarian restaurant a block off the Kaertnerstrasse, near Stefansdom, I was carefully assured by the waiter that the beef on the menu was "biologic." I hadn't expected that it might have been mineralogic, but he wanted me to know that I wouldn't get mad cow from eating it. (They were very spooked about that that year.) His concern was fetching, but he made the assurance with a cigarette dangling from his lips. A great many restaurants (or State governments) in the Land of the Free won't even allow the patrons to smoke. The idea that the waiter would approach the diner with a lit cigarette in his mouth would not have occurred to anyone even in restaurants that still have smoking sections.

I ordered the beef goulash. I like to live on the edge.