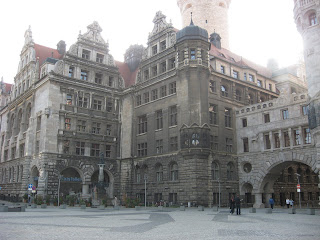 For some totally unknown reason, Blogger has decided to allow me to post pictures (mysterious are the ways of technology). This is the New Town Hall in Leipzig. It's not really medieval, having been built in the late 1800's, but it's impressive nonetheless. The BurgPlatz, the square there beside it, has nice little cafes and a lovely Italian restaurant. 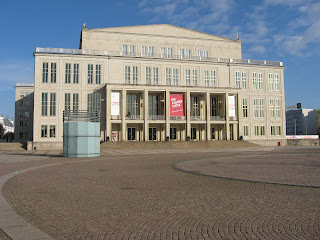 This is the Opera House. Built in the 1950's, it has a light, airy main theater of pale wood and simple lines. Last night I saw Swan Lake (Schwanensee) there, danced by the Leipzig Ballet. Maiko Oishi danced Odette/Odile with exquisite precision. There were a great many children and teens in the audience; in the States I've only ever seen that at performances of The Nutcracker. 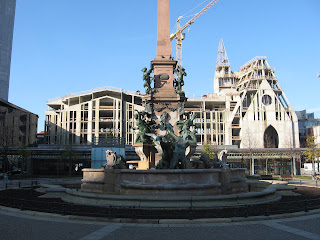 This is the Mendes Fountain (turned off now for the winter) at AugustusPlatz, Leipzig's primary square. Behind it is a controversial bit of construction: a university building that will include a sort of replica of St. Paul's Church. This was blown up by the GDR in 1968. It was replaced with university buildings, which in turn are now being replaced. Construction cranes work busily everywhere in Leipzig. 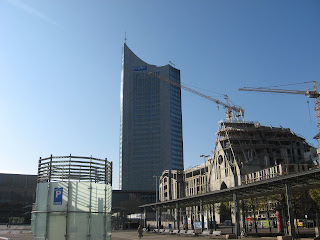 This is taken facing the other way across AugustusPlatz, toward City Tower, Leipzi's tallest structure. There is a restaurant up there that I have yet to visit, but it's supposed to have a spectacular view of the entire city. If I were a better photographer, this picture would not have that temporary plastic kiosk in it. 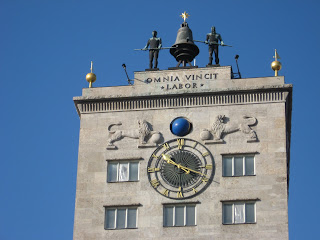 This is the top of the Kroch-tower building, one of the few left in AugustusPlatz after WWII bombing. The figures at the top chime the bells every quarter hour. They sound a bit tinny, however. The inscription -- in case you forgot your Latin -- says "Work conquers all." 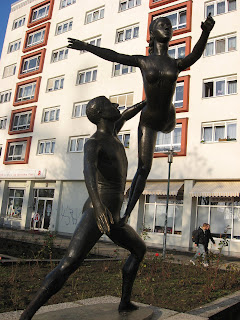 The statue of dancers at BayrischerPlatz, beside my favorite cafe. I covet this statue. I would take it home if I could. But it weighs several tons, and Customs might notice.

I've never been good at parsing Latin, despite getting an A in the course. I would have translated that as "Everything beats working."

I suspect that statue is a little too big even for checked baggage (Some airlines allow you to check antlers up to 10 feet in length, however). And think how much it would cost if they managed to weigh it! Then there's the little matter of the plane taking off. So I wouldn't worry about customs.

I didn't want your post to go without comments, even if this one isn't up to standards.