Conventions are fun. They are also exhausting. I did three panels today, one of which was "The Nancy Kress" panel, during which I discovered how embarrassing it can be to sit there while four other people discuss your work and tell anecdotes about you. More comfortable was the "Writing as Craft" panel, when established writers gave advice to aspirants. Everybody loves to give advice.

MileHiCon has all the usual con attractions, including an art show, kaffeeklatsches, dealers' room, con suite and people wandering the halls dressed as if attending gatherings in the past, future, or other dimensions. Here are two of these, plus the dealers' room, which had some lovely jewelry: 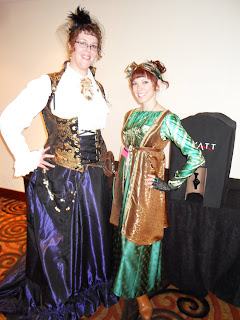 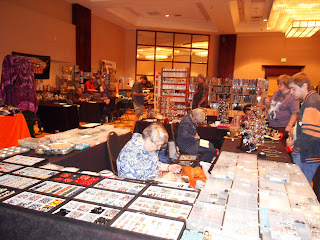 As always, some of the best discussions occur in restaurants and bars. At a birthday dinner for Courtney Willis and Jack Skillingstead (both turning 101), Paolo Bacigaluppi and I discussed the difference to a career that can be caused by the order in which one writes books. Following a very successful book with one with far less mass appeal is a bad idea in terms of the perceptions of the writer held by marketing departments and book sellers. Naturally, this is what I did, following BEGGARS IN SPAIN with the much more gloomy and difficult MAXIMUM LIGHT -- to the detriment of future sales and reputation. What writers need is what Paolo called the "sweet project" -- the book that a writer both wants to write and has widespread appeal.
After dinner, when everyone had recovered from the off-key rendition of "Happy Birthday" in the hotel restaurant, some of us went to the masquerade. "Best in Show" was taken by a sexily dressed "Scarlett Witch," whom I unfortunately did not get a solo picture of, although she stands out redly in the photo below. The tiny charmer in the front won in the children's division as "Punk Princess Fairy." 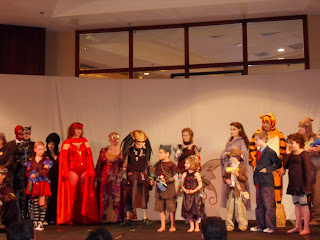 The day finished in the bar and con suite with more discussions of SF, but by that time I was too tired to register what was actually being said except for Connie Willis's very funny riff on Sarah Palin, who is also a pretty fantastical construct.

Sigh. Why do so many authors inevitably feel the need to insert political asides into otherwise engaging conversations? And why is it always the same political slant? Is it that they really think that everyone shares their worldview--or do they just not care about alientating 50% of their fan base?

I'm not a fan of Palin, and your comment here is relatively innocucous, Nancy, but I really am curious: would the same group present at that table have laughed at a dead-on mockery of Obama (who as a reification of 'hope and change' is, after all, a pretty fantastical construct himself)? If they had, would you have thought twice about mentioning it in a blog post?

Was very nice to see you at the MileHiCon, Nancy. Thanks for my autograph!!

Andrew-- I was reporting the tenor of the conversation about Sarah Palin -- and that was the tenor. This is not a political blog, but what writers say is very much a part of them, and this IS a blog about writers.

I will say not a word.

Well, just this: how =dare= a white Conservative woman get to be a Governor?!