The final day of MileHiCon began in the con suite, which was having a kerfuffle with the hotel over serving hot food. But there were donuts and bagels and coffee and conversation. Barbara Hambly and I caught up on who is writing what. Her new book, HOMELAND, a mainstream Civil War novel, is just out. Here is Barbara, wishing she had a copy of the book to display: 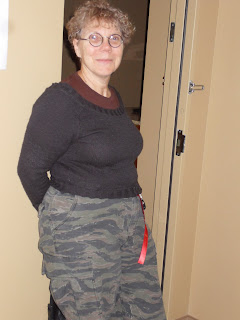 After breakfast, down to work. I did a curious program item called "An Hour With Nancy Kress." I'd been told that during this hour, previous guests of honor had sung, danced, done a magic demonstration, and generally proved entertaining. Since I can do none of these things (and nobody anywhere wants to hear me sing), I just talked. Fortunately, the audience had lots of questions about writing, publishing, working method, etc., and it was a quick and enjoyable hour, followed by the GOH speeches. These also involved presentations. John Picacio displayed paintings and discussed their evolution. Music GOH Marc Gunn sang and played the autoharp. Since I had been scheduled opposite his main concert and hadn't had a chance to hear his wondeful Celtic music, this was a treat: 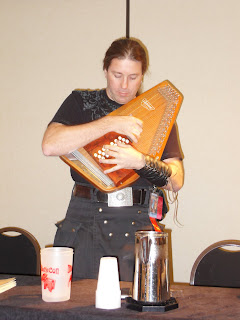 When Marc was finished, it was my turn. More talking. Why can't I learn to demonstrate glass blowing or something? Ah, well. We GOHs were all given little awards, and here I am accepting mine, still blathering: 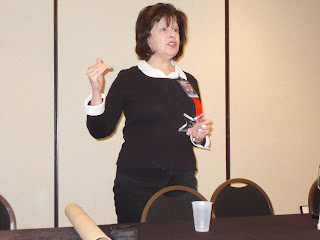 Lunch was followed by schmoozing (more talking) after which the altitude finally claimed me. Denver is 5,000 feet high, and despite drinking a lot of water ("Hydrate!" everyone constantly told us feeble low-landers), those of us unaccustomed to the altitude had been a bit draggy all weekend. I suggested to Ed Bryant, a Coloradoan, that next year MileHiCon should lower the city several thousand feet, and the Con Committee said they'd look into it.
When I left for the airport, it was snowing. Actual, stick-on-the-ground snow. But it didn't delay the flight back. Seattle looked lovely shining through the fog. I am here one more week, then home to Rochester.
Posted by Nancy Kress at 8:58 AM

Sorry I missed seeing you, glad you had fun at our little local convention.

It was a real treat watching your panels at MHC.