This was a very intense day at the astronomical knowledge factory. It started with a long breakfast with Laura Mixon, Steve Gould, Alma Deckert, and David Marusek, discussing E. coli and genetic mutations. Also science fiction, sleep disorders, and a dozen other subjects. These are smart people. Then on to the classroom. Here is David Marusek beside a defunct telescope that has now become a corridor sculpture: 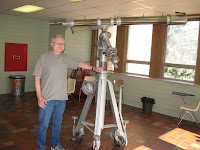 The day's first session started with Mike Brotherton advising us of cool websites for astronomy. My favorite (which I hadn't known about before) was apod.NASA.gov. "Apod" stands for "astronomy picture of the day" and that's exactly what it is. There's also an archive of wonderful photos. Check out July 8: "A Seemingly Square Nebula."

Mike then launched (sorry) into "The Electromagnetic Spectrum." We covered all the basics (wavelength, frequency, energy levels, the Planck constant, photons, black body radiation, Kirchoff's laws). I was doing fine until we hit the math of the Stefan-Boltzmann Law, where I sank. I was, however, pleased to discover that my body is radiating infrared at about ten microns. Mike finished with photos and descriptions of the great telescopes -- of all kinds -- of the world.

At lunch, we all got to play with an infrared camera and night-vision goggles. Through the camera, footprints are visible even after the person has left the room (although they fade fast). Steve Gould made "light angels" on the carpet. 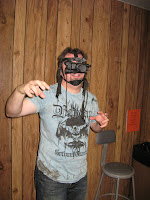 Mike Brotherton in night-vision goggles, looking like a BEM that has unaccountably dressed in jeans.


Three afternoon sessions, which made for a very long day. First, the Physics and Astronomy Department Chair, Danny Dale, discussed "Dust in Space." Forty tons of interstellar stuff -- dust, small meteorites -- hits the Earth every day. Next we moved downstairs to the astronomy lab, where we used primitive spectographs to analyze emission spectra. I incorrectly identified neon as barium (but so did half the class). 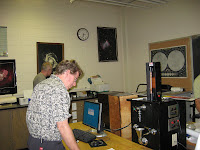 Steve Gould ponders the mysteries of a bright-line spectrum.


For the final session of the afternoon, the calculators came out, and Jerry Oltion led us in creating the to-scale dimensions of the solar system. We finally, after many false steps, figured out that in order to fit our t0-scale model into the classroom out to the orbit of Pluto, the sun would have to be the size of a coriander seed and Jupiter smaller than a grain of salt. To make sure we understood the vastness this implied, Jerry had brought along a coriander seed. Also salt. Alpha Centauri, the closest star, would be in the next city, Cheyenne. We then calculated the velocity needed to keep an object in low-Earth orbit (17,000 mph) and, for good measure, the gravity aboard the space station in 2001: A Space Odyssey. This involved watching the movie long enough to count the revolutions per minute of the station, estimate its size from the size of people aboard, and do a lot of calculations for v-squared = rg, during which I got lost in the units conversion and never resurfaced. Down for the third time.

Since I was pretty much a vegetable at this point, I skipped dinner and tried to sleep, but again this did not work. There was only 45 minutes allotted for it, anyway, after which we were all carted off to a party at Mike Brotherton's. The university faculty were there as well. It was a lovely night and the party ended up outside on Mike's patio. I was interested to discover an absence of mosquitoes, since at home no one can sit outside after sundown without either screens or a thick coat of insect repellent. But it is very dry here; no place for the little buggers to breed.

And so to bed, my brain stuffed with information that actually appeared in dreams. Very weird sensation.