No class this morning, so the other too-early-riser, Deanna Hoak, and I took an early morning walk in search of a cowboy hat to buy. No luck (although I did find one later), but we had coffee, and I got to hear how the publishing industry looks from the viewpoint of a copy editor. 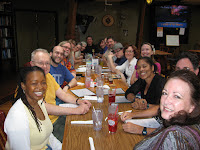 Lunch was en masse at The Library, a restaurant across the street from campus, where I tried "Rocky Mountain oysters." Jay Lake did warm me they are sheep testicles, but I ate them anyway. Tastes like chicken.

Two classroom sessions today, "Amateur Astronomy" from Jerry Oltion and "Everything You Always Wanted to Know About Stars" from Mike Brotherton. Jerry's love of astronomy came through as he enthused about telescopes, mounts, and the ways that amateur astronomers work with professionals to build up huge data bases. Now I know what to look for if I ever buy a telescope.
The star lecture excited everyone, in part because it tied together everything we'd learned so far. Suddenly absorption spectra seemed relevant. I even finally understood the Stefan-Boltzmann constant! Mike covered the Hertzsprung-Russell diagram in great detail, including the classification, characteristics, and life cycles of stars. I finally learned the differences among brown dwarfs (never reached fusion), red dwarfs (completely convective), and white dwarfs (burning nothing, since their fuel is all gone and they're just cooling slowly toward The Big Chill). There were spectacular slides of nebulae, star clusters, and other such astral phenomena. Mike is a thorough and lucid lecturer.
We then all packed up our warm clothes and headed straight for Wyoming InfraRed Observatory (WIRO) on top of Jelm Mountain. The trip took well over an hour. I am an Easterner; we don't have this much emptiness in my state. The road seemed at places to go straight up. It was unpaved and the van beeped and protested. Several of us began to feel light-headed; WIRO is at 9,500 feet. But no one was ill, and the scenery was spectacular. 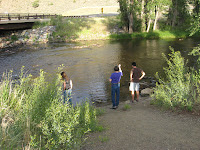 Deanna Hoak, Jerry Oltion, and Paul Whitcover admire the Big Laramie River, which looked to me like a smallish creek. 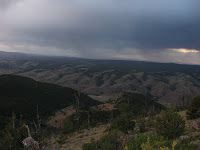 WIRO, on top of Jelm Mountain, and two views of the valleys below that in way do justice to the view. 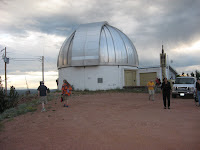 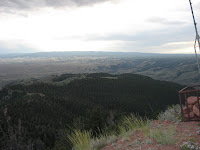 After a sandwich dinner, we explored the 2.3 meter telescope. The two currently resident astronomers (they stay up there for as much as a week at a time) opened the dome. It's a majestic sight, the shutter slowly pulling back to reveal the sky. Almost immediately it began to rain.
We have had perfect weather all week -- until tonight. Everyone trooped back inside, examined the computer room where the data is collected and used (this isn't the kind of telescope you ever actually look through) and settled down to wait out the storm. Some discussed astronomy; some played poker; I beat Jay Lake at chess and then lost to Mike (who has a really, really high Chess Federation rating). Eventually the weather cleared. 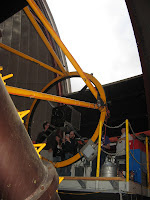 The WIRO telescope open to the sky and festooned with Launch Padders.

I can't adequately describe the sky from the top of Mount Jelm. Little light pollution, a 360-degree horizon, and all the glory of the heavens on a mountain top. Then Mike brought out the night-vision goggles, and it got even better. A million more stars popped into view. Through the goggles, which see in heat signatures, the sky looks faintly green and the stars glow hot white like the furnaces they are.
About 10:30 the first group, including me, headed back down the mountain. Temperatures increased, ears popped, sleepiness replaced light-headedness. After WIRO, Laramie looked very civilized, almost too refined -- not an impression I'd had of it before. And so to bed.
Posted by Nancy Kress at 7:30 AM