For a very long time, science and math have been considered male provinces. LaunchPad, however, has eight female attendees and five males. Here we are, the Astronomical Women (aka Girls of the Galaxy):

Top row, right to left: Mary Robinette Kowal, Christine Stebbins, Cherryl Floyd-Miller, Deanna Hoak, Andrea Hairston. Bottom row: Alma Deckert, Nancy Kress, Laura Mixon.
Today was a very full day. At breakfast the conversation turned to the emotional components of beginning to succeed at a career in writing: fear of failure, fear of success, dealing with the envy of those who started when you did but are selling less well, the whole complicated cluster of emotions around awards like the Nebula and the Hugo. Many different viewpoints were offered and -- more important -- accepted. We learn outside of class, too.

In class, Mike Brotherton gave us two and a half hours on galaxies: what we know, how we know it, and why it might be wrong. Those twin enigmas, dark matter and dark energy, were explained to the extent that they can be, complete with the math. I followed as much as I could, feeling some affinity when we got to WIMP, but this turned out to be not a brain reeling on information overload but rather a "weakly interacting massive particle." As always, the slides were spectacular.

Some of us escaped the classroom for lunch on the grass. The campus contains many interesting things, including this: 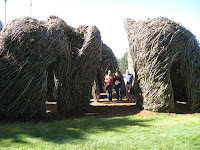 Deanna Hoak, Laura Mixon, and David Marusek inside a sculpture made entirely of twigs, branches, and grasses. It smells of sage and will not last long.

The afternoon had three long sessions. Mike, who was by now sounding a little hoarse, led us through "Cosmology," including the conflicting theories of the Big Crunch, the Big Empty, and the Big Rip. There was more on dark matter and dark energy. I was most fascinated by the large-scale structures of the universe as a whole: filaments and walls of galaxy superclusters that map, in Mike's words, "looking like the innards of a pumpkin." 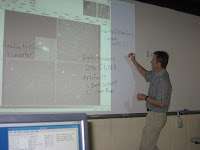 Mike explains why everything isn't somewhere else.

We then moved to the astronomy lab for a seminar on "Astronomical Imaging/Data," led by astronomer Chip Kobulnicky. Paired at computers, we manipulated the images taken two nights ago at WIRO to add color, combine galaxies, and generally behave as gods of creation. The program is called DS9, for "Deep Space Nine" -- astronomers are SF fans. Cherryl and I worked on the ring nebula photos, which I would include here if I could find it on my computer. It's in here somewhere, I know.
Back in the classroom, Jeffrey Lockwood led writing exercises on what messages we should send to aliens through SETI. This ended up as a spirited discussion on whether aliens could understand anything at all from us. Would we even have simple math in common? Was math intrinsic to the universe or just another human symbol system? And what about sending haiku into deep space?
I skipped dinner in favor of a brief rest. Then on to the rooftop of the astronomy building for small-telescope night. We viewed Jupiter, the Wild Duck Cluster of stars, the ring nebula we had colorized earlier in the day, and the double star Mizar/Alcor in the Big Dipper. The space station sailed majestically overhead. We all waved. Humans in space, humans learning about space, math in space. And pumpkin innards.
Posted by Nancy Kress at 5:29 AM

Science and Math have been mens' provinces because, historically, the XY crew has done the most important work. Can you name =one= female mathematican? Me neither. Our brains work differently. Womens' excellence is focused elsewhere.