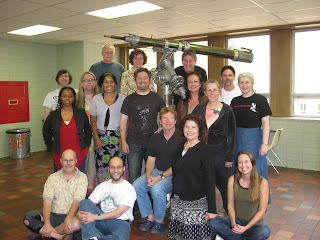 Today was the last day of Launch Pad. Here we all are, saying good-bye to a wonderful experience. Just because it was the last day in no way meant that the pace slackened. We had five presentations, from:

1) Dr. Ruben Gamboa on "Computing in Astronomy." I was astonished to learn that because the computer programs had not been ready in time to make the launch window for two previous Mars rovers, Spirit and Opportunity, the programs were uploaded to the robots after they reached Mars. What if there had been a bug?

2)Jerry Oltion on "The Human Element in Space." Much interest in sex in space. However, the experience is likely to be disappointing for several reasons, including that blood pools in the wrong part of the body. People aboard the KC135 (the commercial equivalent of NASA's "Vomit Comet") have apparently tried it, but they only had 25 seconds of weightlessness to get as far as possible. Enough said.

3) Dr. Rajib Ganguly on "Quasar Absorption Lines." This one I couldn't follow, due to a lack of both sleep and high-school chemistry. Finally gave up and caught a nap on the sofa in the hall.

4)Mike Brotherton on "Extra-solar Planets." Very useful to SF writers. Mike also recommended the website www.exoplanets.org, which keeps track of what we've discovered, where, and how. Current score: 228 planets discovered in our galaxy.

5)Mike again on his current research on "Post-Starburst Quasars." Amazing slides of distant quasars, plus information on how we know what we know about these high-energy quasi-stellar objects.

Then everyone trooped off to dinner at a Thai restaurant. We are now all packing for an early departure tomorrow. I cannot recommend LaunchPad highly enough. For those interested in applying for next year, information will soon be available at www.launchpad.org.

Tomorrow -- on to Denvention, the World Science Fiction Convention in Denver.
Posted by Nancy Kress at 7:27 PM

Ah, sex in space! Who hasn't wondered about it? Free-fall courtship rituals...

But Nancy, you know Little Mike is a romantic. I am sure...I AM SURE..,
Love will find a way. Love always does.