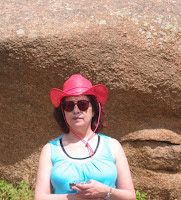 Today I wimped out.

In the morning we took a hike in the Vedauwoo Recreational Area of Medicine Bow National Forest. Spectacular rock formations, forest of pine and aspen and birch. The trail to Turtle Rock wound through patches of forest, between massive boulders, through tiny meadows. Unfortunately, I didn't see all of the trail. After one mile, Alma Deckert and I were done in by a combination of sun, altitude, and lack of sleep, so we returned to the van and waited for the others. Still, this meant we did two miles, each step scented with the ubiquitous sage, and the walk was gorgeous. 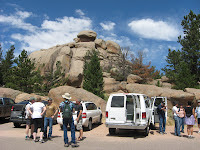 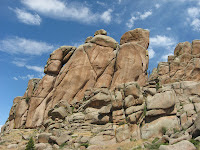 There is a climber scaling this cliff face and here.... 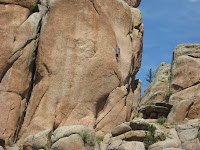 he is on zoom lens. 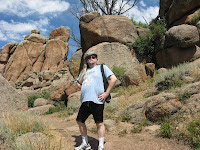 And here is Jay Lake, recent cancer survivor, looking justifiably proud of himself. He did more of the hike than I could.

Back at the dorms, we had 15 minutes to all shower and reassemble, since the day was behind schedule. A fast lunch at a Mexican restaurant and back to campus, this time to the planetarium. Jim Verley instructed us on the ecliptic, constellations, right ascension and declination, and how all of this would look both from Laramie and from David Marusek's home in Fairbanks, Alaska. We got a limited look, however, because the planetarium equipment was malfunctioning slightly, able to show only the view at noon. Stuck at noon! Jim finished with a rousing laser display to the music of Pink Floyd.

By now we were hopelessly behind schedule. So Jerry Oltion deferred his presentation until tomorrow and Mike Brotherton finished his from yesterday. He covered binary stars, accretion disks, all kinds of novae, pulsars, neutron stars, and black holes. Again, the slides were spectacular. I learned that the saying among astronomers to describe the stripping of normal characteristics of matter from black holes is: "Black holes have no hair."

Back to the dorm, later than usual. I don't know what people did about dinner or with our free evening because I crashed early, hard, and long. There is no place on Earth I'd rather be this week than at this seminar, but it takes an enormous amount of energy, and I've never had enough of that precious commodity. I need to be a pulsar. Or perhaps a quasar, but I can't say for sure because we don't get to those until Tuesday.

I admire guys and gals who climb mountains. They show energy and focus. Never do it meself, though. What if I wuz halfway up and the mountain fell down?